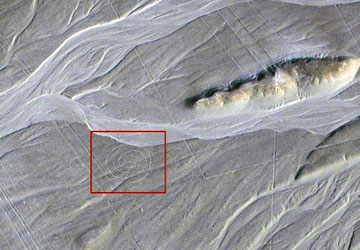 Aerial shot of the spiral segment of the supposed labyrinth. 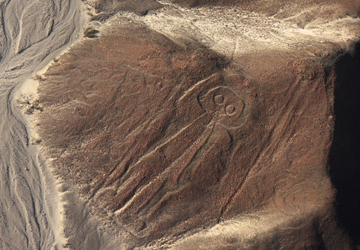 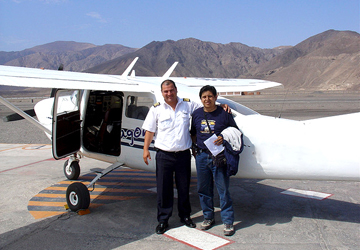 Getting ready to fly over the Nazca Lines in Peru 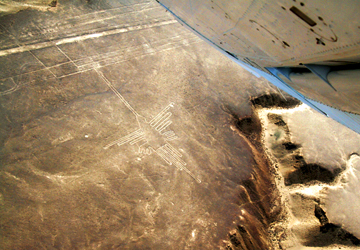 The large hummingbird among the Nazca Lines in Peru 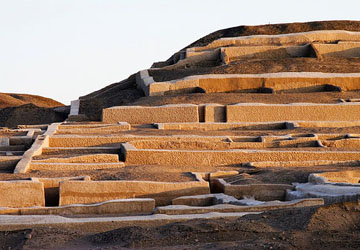 Nearby Cahuachi, the Nazca pilgrimage site in Peru

The Nazca Lines are hundreds of lines, geometric figures, and zoomorphic designs representating a variety of animals, plants, and human figures. They stretch across miles of desert floor in southern Peru and for the most part can only be seen from above. They date back around 1500 years, to the mysterious Nazca civilization which flourished in the area. Since their discovery in the 1920s, competing theories regarding their purpose have abounded, suggesting that the geometric designs could be diagrams of underground water sources or even landing strips, and that the pictorial representations could be fertility symbols or constellations. The most accepted interpretation in the last decades - and that espoused by the line's most devoted researcher, the late María Reiche- is that all the lines together were agricultural calendar intended to remind the gods of the need for rain.

Two British researchers announced in this month's Antiquity the discovery of what appears to be an enormous labyrinth among Peru's world-famous Nazca Lines. It is composed of a single twisting path 4.4 kilometers long, with 15 corners that would bring them away from and towards a large hill before turning into a spiral. From start to finish, walking the path probably would have taken about an hour. Rocks lining the path display minimal damage, suggesting that those who walked the path did so alone or in single file and with care. In the vicinity of the pathway, one does not find the ceramic and other remains left behind by pilgrims en route to Cahuachi that one finds around the other Nazca Lines, suggesting that use of the pathway was limited. The researchers suggest that perhaps it was intended for use by shamans or pilgrims during spiritual journeys, or perhaps for Nazca gods.

Like many of the lines, its form is not visible at ground level. Flying overhead, the lines across the desert floor are visible, but do not appear to connect in a single entity, but the findings of the researchers, archaeo-astronomer Clive Ruggles from the University of Leicester and archaeologist Nicholas Saunders from the University of Bristol, indicate otherwise. The only way to discern the course was to actually walk it. Several small sections had been damaged by rain, but over course of a five year stude the two successfully mapped out the course by walking the lines and studying superimposed designs, digital satellite mapping, and photographs of associated pottery.

According to Ruggles, "this labyrinth was meant to be walked, not seen. The element of surprise was crucial to the experience of Nazca labyrinth walking." Archaeoastronomer Anthony Aveni from Colgate University, who suggested in 2000 that the Nazca Lines were actually pathways, said that the case that Nazca labyrinths were meant to be walked while remaining mostly unseen "is novel and well-argued."

Dr. Saunders further clarified that "meandering and well-worn trans-desert pathways served such functional purposes but they are quite different from the arrow-straight lines and geometric shapes which seem more likely to have had a spiritual and ritual purpose.  It may be, we suggest, that the real importance of some of these desert drawings was in their creation rather than any subsequent physical use."