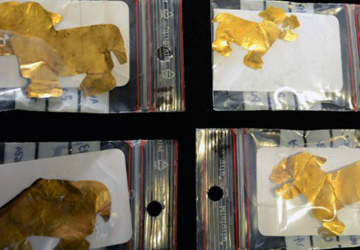 Gold relics discovered in the Bolivian side of Lake Titicaca 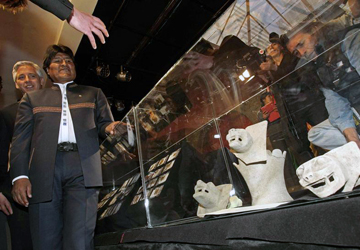 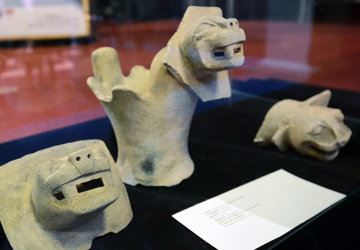 Puma head vessels discovered near the Island of the Sun 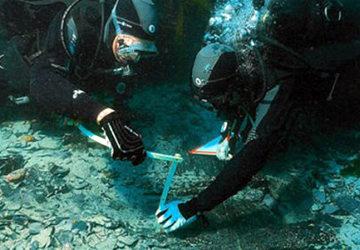 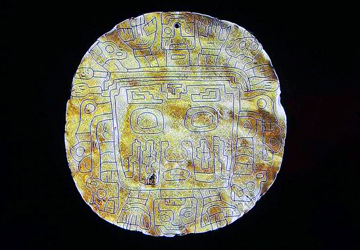 For centuries, there have been legends of Lake Titicaca hiding submerged citadels and riches hidden by the Aymara and Quechua communities from the Spanish conquistadores. Now, we may be on the verge of seeing how much of these legends are true. In an earlier article, we wrote about the revolutionary Huiñaimarca (or Wiñay Marka) Project, a joint project sponsored by the Ministry of Bolivian Cultures and the Free University of Brussels. Its aim has been to uncover remains which the cold waters of Lake Titicaca have protected from for more than 2,000 years from the corrosive effects of sunlight, heat, and oxygen, as well as looters. To do this, a revolutionary plan of subaquatic archeological was launched a few months ago, and is slated to continue for a three-year total duration. All the findings to date were collected during the first six-week phase of project, while the next phase of dives will resume in April 2014.

The project's name is Aymara for Eternal Nation, and its co-directors are Belgian researcher Christopher Delaere and Bolivian investigator Marcial Medina. After geophysical surveying uncovered six submerged archeological sites, the discovery of residential and ceremonial structures (as well as agricultural terraces) was announced in May, and the international team began to vacuum the lake's sediment layer by layer soon after.

Over the last several weeks, thousands of pieces were found, a sample of which were displayed yesterday in La Paz, Bolivia in a ceremony attended by President Evo Morales, Vice President ÃƒÂlvaro García Linera, and Minister of Culture Pablo Groux. These included silver pieces, sheet gold, carved stone puma heads and fragments, ceramic vessels, and bones dating back 2,000-2,500 years. "We have here 2,500 years of history", affirmed Delaere, indicating that researchers would continue with carbon 14 dating and complementary analyses to establish the precise dates of the sediment and the objects found, after which the relics will pass under the state's ownership.

The invaluable relics were uncovered in the sediment 130 km north of the Island of the Sun, at the Khoa reef (close to the lakeside towns of Tiquina and Copacabana), where offerings were made during the time of the Tiahuanaco Kingdom and the Inca Empire. The pieces correspond to both cultures, but there are also some which date back to the 19th and 20th centuries. Researchers expressed surprise over the finding of semi-precious stones, such as the bolivianita, and gems or pieces with roots in the Ecuadorian Amazon and northern Chile, providing evidence of intense commercial and cultural exchange among these regions prior to the arrival of the Spanish. The remains of a rudder and an anchor from a sunken 1,500 year-old boat were also found.

In just 2 months of underwater exploration, 31 sheet gold fragments were found, principally around the sacred Island of the Sun, where Incan legend related that Manco Qapac and Mama Ocllo rose from the waters to later found the Inca Empire in Cusco, Peru. "They have an incredible historic value, because they are the first gold pieces found," said Delaere. "This is a finding of incredible historic value. The place where we find the pieces had and continues to have a great importance for the spirituality and beliefs of Andean cultures, these being the Tiwanakota, Inca, or contemporary cultures." After Delaere's report, President Evo Morales recommended to the Ministry of Culture that the investigation be enlarged, and lamented the loss of Bolivia's pre-Columbian relics through the years, announcing that his country aims to recover all of its historical heritage currently found in the countries of Europe and the United States.