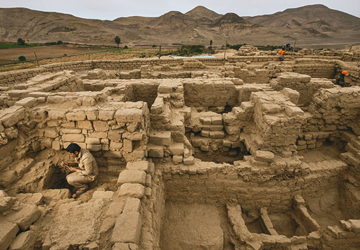 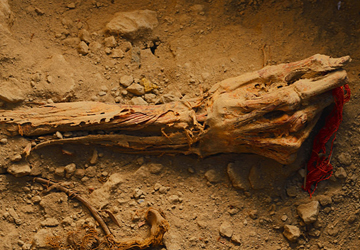 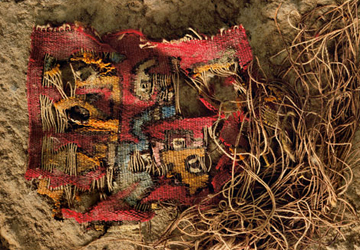 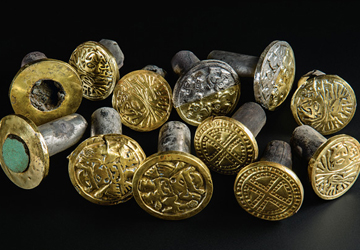 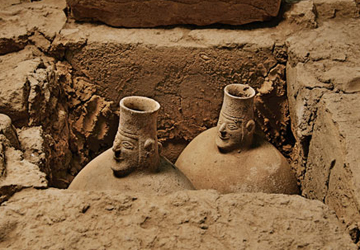 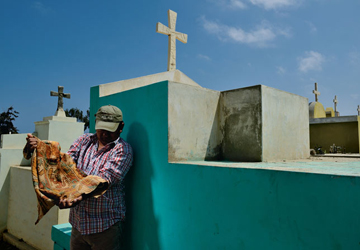 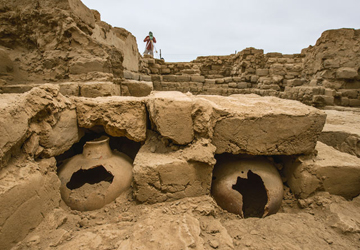 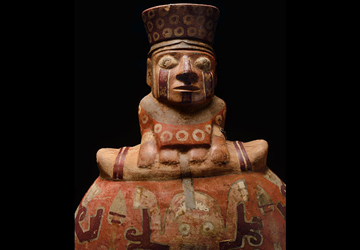 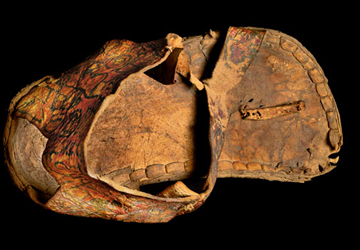 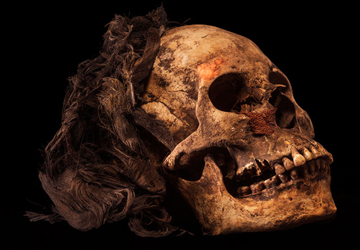 Skull of a Wari noblewoman in Peruvian tomb 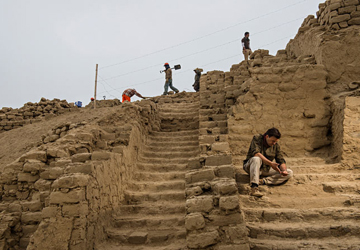 The pyramid was built as uncovered: from top to bottom 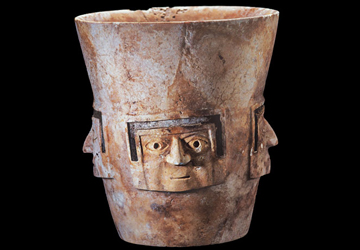 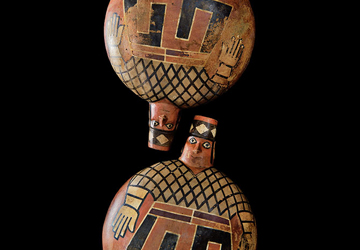 For more than a century, grave robbers tunneled into the massive El Castillo de Huarmey hill, removing objects of value and leaving behind the rubble of damaged artifacts and scattered bones. Although most considered the enterprise to be a waste of time and money, three years ago a Polish-Peruvian team under the guidance of MiÃ…Â‚osz Giersz and Roberto Pimentel Nita began excavations at this well-known site, which is located just four hours north of Lima, along the Peruvian coast.

Through aerial photographs and  underground imaging, the research team uncovered the faint outlines of buried walls in an area the looters had missed. The team slowly realized the scope of their discovery as they painstakingly unearthed a massive, labyrinthine complex of towers and walls which appears to be a Wari temple dedicated to ancestor worship.

Within, to the surprise of everyone, was an unlooted royal tomb housing four Wari queens or princesses, at least 54 other elite individuals. The bodies were dressed and adorned with precious jewelry before being wrapped into funerary bundles. They were accompanied into the next life by human sacrifices, presumably the children of subordinate nobles, and then the tomb was sealed.

Concealed under a layer of adobe mud-brick, near rows of small sealed chambers filled with ceramic jars painted with animal designs and grinning human faces, the ancient tomb evaded discovery for more than a thousand years. Looters came close enough to damage the jars, but never found the entrance, nor the thousand fine artifacts tucked away inside the tomb: gold ear ornaments, golden weaving instruments, silver chalices, bronze ceremonial axes, crystal necklaces, and some of the finest woven tapestries ever made- objects so valuable that the team worried about sleeping at night, lest they be attacked by looters.

The find is one of the most important archeological discoveries in years, and is shedding new light on the Wari, whose civilization reached its apex in the 7th century. They built complex aqueducts, canals and terraced fields long before the ascent of the Incas, dominating the Andes and coastal deserts. Their capital city (located about 500 miles from the site) was twice as large as Paris at the time, and they forged the first empire in Andean South America. All of this was accomplished with no writing system, which makes the ceremonial items depicting historic battles even more valuable to researchers.

Intriguingly, the El Castillo pyramid was built from the top down, carving the subterranean tombs out of a natural rock formation. Atop the royal tomb, the Wari built a mausoleum tower with crimson walls, and the elite built their own burial chambers one the slopes of the same hill, creating an immense necropolis of astonishing wealth which grave robbers have picked apart gleefully for a large part of its thousand years.