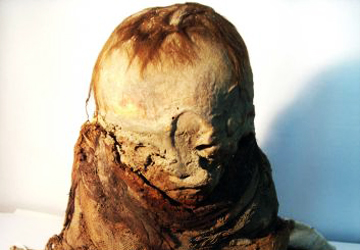 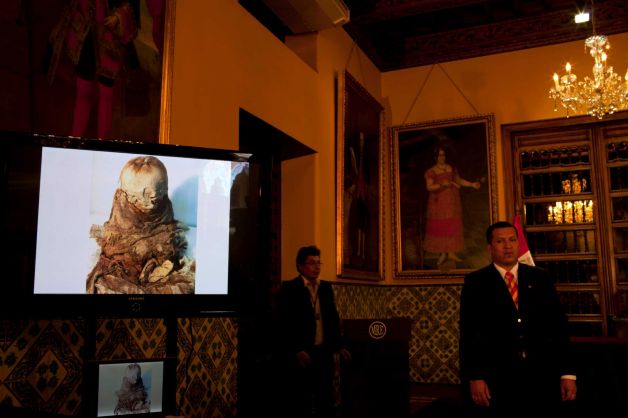 The diminutive 700 year old mummy- only about a foot tall- was a toddler of unidentifiable sex, positioned in the curved sitting but still fetal-like position characterized by Incan and pre-Incan mummies and wrapped in pieces of a camelid cloth, such as llama or alpaca. According to archeologists, it appears to hail from a pre-Incan culture of the Peruvian coast. It was found to have been "completed" with a leg from another child, presumably to raise its commercial value.

To much fanfare, the mummy returned to Peru after a two-year stay in Bolivia, where local authorities confiscated it from a Bolivian citizen attempting to ship it to Compiegne, France. It was formally handed off by Bolivian Cultural Minister Pablo Groux during a press-conference this afternoon. Peruvian Cultural Minister Luis Peirano declared to the gathered press that "this small package is just a sample of the sacking, of the violation of our patrimony and all our inheritance." This victory against trafficking comes after last year's repatriation of a mummy trafficked to Germany more than two decades ago.

Colonial paintings and archeological relics such as pre-Columbian ceramics, precious metals, and textiles are much more common objects of plunder, but according to Blanca Alva, the official from the Peruvian Cultural Ministry charged with the protection of cultural heritage, the uncommon practice of mummy trafficking has been on the rise. "Lately, there has been an increase in this, the trafficking of human remains." Skeletons and mummies were not even expressly prohibited for export until 2009.

It's all part of the fierce struggle Peru has been engaging in to protect, and where necessary, regain, its cultural heritage. When Yale University returned hundreds of priceless artifacts taken from Machu Picchu during the original Hiram Bingham excavations, the news was joyously received by Peruvians. Politicians and laymen alike had long used the pieces' exhibition at the university's museum as an example of the antiquities theft that the country has suffered throughout its history. As the more than 350 pieces arrived at Casa Concha, they were greeted with an Incan ceremony.

A year after the repatriation, more than 70,000 people have visited the exhibit, with Nobel Prize winner Mario Vargas Llosa among the first, and the formerly little-known colonial monument is becoming a requisite stop for visitors to Cusco.