The Virgin of Candelaria Festival in Copacabana, each August and February 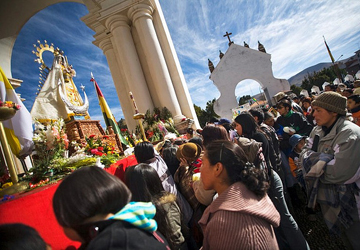 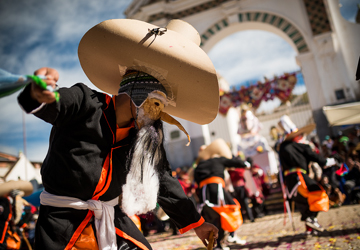 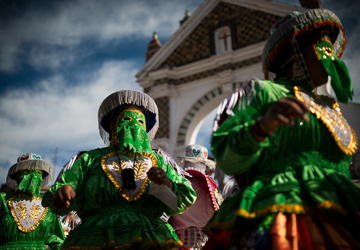 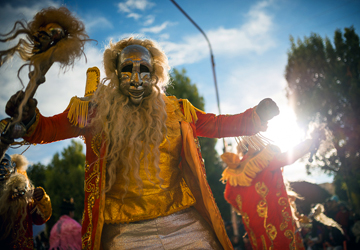 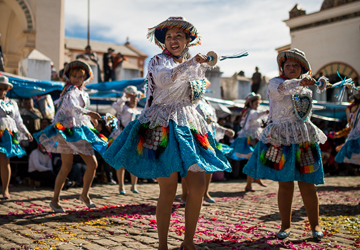 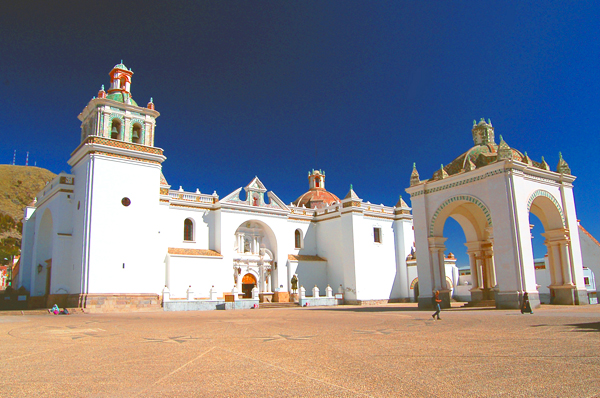 Basilica Shrine of Copacabana in Bolivia 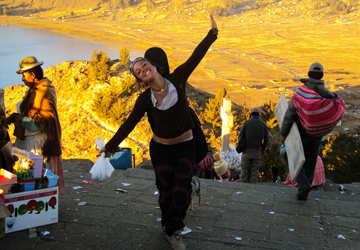 The Festival of the Virgin of Candelaria is celebrated in Copacabana twice a year, on Feb 2nd and Aug 5th. On both days, the event is marked by folkloric parades with live music and vibrantly costumed dancers, religious processions combined with drunken street parties and feasting, shamans selling fortunes along streets lined with new vehicles festooned with streamers and presented for blessing with beer. Religious jubilation is everywhere, although it's not expressed in the pious ways one might expectÃ¢Â€Â¦Overall, it's a fun and fascinating time to be a tourist in Copacabana.

The Virgin of Candelaria's been considered the patron of Bolivia since being crowned the "Queen of the Nation" in 1925, but her cult in Copacabana dates back to the 1500s, when local Anansayas decided to found a brotherhood in honor of the Virgin, motivated by poor harvests. It's one of the oldest sanctuaries dedicated to Mary in the Americas (together with that of Guadalupe in Mexico). Since the founding of the sanctuary, she's had an illustrious career, having been awarded the rank of General in the National Police Corps and of Admiral in the Bolivian Navy!

Dusty Copacabana itself is a relaxed town firmly ensconced on the backpacker trail thanks to its proximity to Lake Titicaca's Islands of the Sun and Moon (scenic sites which were considered sacred by the Aymara and Inca). It is located 86 miles from La Paz, from where visitors arrive by bus each day. Some pilgrims actually walk from La Paz to Copacanaba's Calvary Hill during this time, in penance. (Other travelers approach Copacabana from Puno on the other side of Lake Titicaca- check here for information about crossing the border.)

A man named Tito Yupanki carved the town's statue, which early on earned a reputation for working miracles. For processions, a replica is used, as supposedly, if the real statue is removed from her sanctuary, the impressive domed Basilica which takes up an entire block, Lake Titicaca will rise up and flood the town in protest.

The statue's dressed in the sumptuous robes an Inca princess, adorned with jewels which have been stolen numerous times in the last few years, and crowned by a long mantle of real human hair. She holds a child that looks like it might fall, and a basket with doves.

While in town, make sure to enjoy the outstanding views from Calvary Hill, where the Stations of the Cross are: it looks over the entire town as well as Lake Titicaca and the nearby islands.