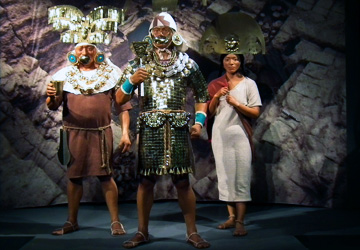 Display at Tombs of Sipán Museum in Lambayeque Peru 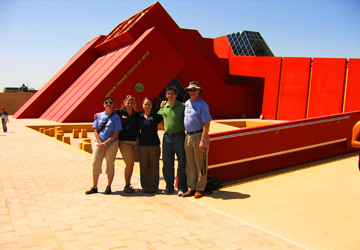 Outside of the Royal Tombs of Sipán Museum in northern Pe 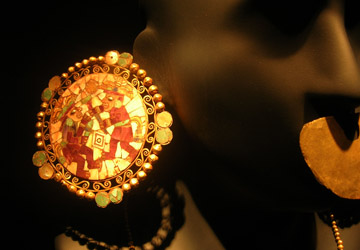 Inlaid golden ear and nose plugs from the Moche civilization 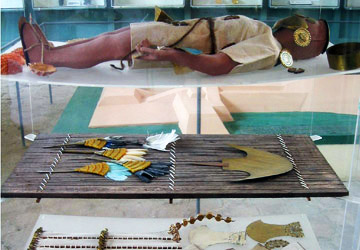 Exhibit at the Royal Tombs of Sipán Museum in Peru 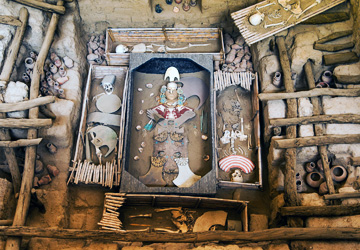 The tomb of the Lord of Sipán, as it was discovered 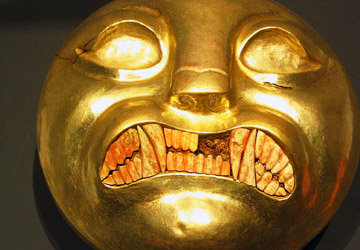 Intimidating golden mask dating back to the Moche. 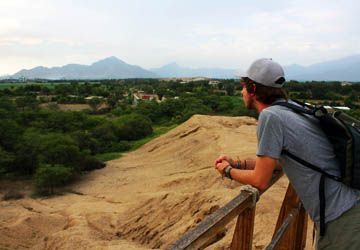 The surrounding landscape at the Moche tombs of Sipán 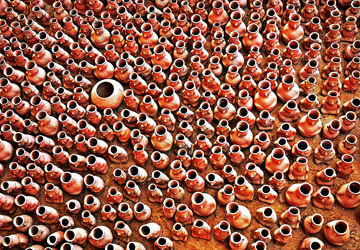 Pottery collection unearthed at the Lord of Sipán tomb 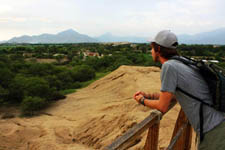 Cover Photo. Overlooking the landscape at Tombs of Sipán.

The tomb of the Lord of Sipán is considered to be one of the most important archaeological discoveries in the last 30 years. Dating back to the Moche culture, which ruled over northern Peru's desert coast two thousand years ago, it is one of the few of its kind which had not been looted. Many travelers pass through this part of Peru specifically to see the adobe mudbrick pyramids and aqueducts which still mark the countryside, and the intricate Moche nose rings, ear studs, necklaces, and helmets skillfully inlaid with precious stones. Although the tomb itself is still under excavation, a mockup of the tomb, with replicas of the priceless head-dress, breastplates, and grave offerings (including many ceramic pieces with individual faces) is open to the public.

The Royal Tombs of Sipán Museum in Lambayeque, which exhibits the objects found in the Moche ruler's final resting place, has announced that by the end of this year it will have received more than 180,000 tourists, which would be a record for the museum since its opening a decade ago. Up to November of this year, 176,719 visitors have arrived at the museum, of which 157,547 were nationals and 19,172 foreigners. This represents a 12% growth in visitors compared to 2011.

There is another reason for the current optimism at the museum as well. Plans are underway to construct a pavilion next year so that the museum would be able to display temporary exhibitions as well.  "We want this to be a center of promotion and diffusion of the cultura universal. That this museum never stops presenting discoveries, cultural testimonies from other areas of PerÃƒÂº and of the world, museum director Walter Alva declared to Peruvian news agency Andina.