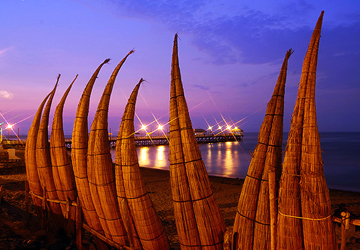 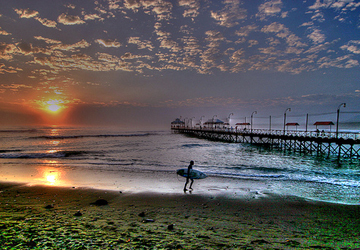 Huanchaco is a surf haven with thousands of years of history 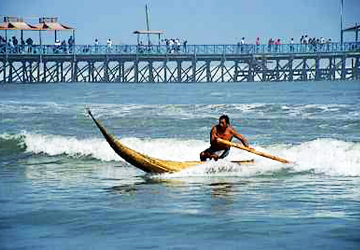 Riding the waves in a caballo de totora in coastal Peru. 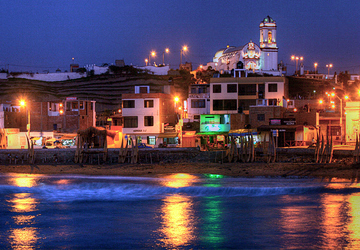 Huanchaco village as seen from the pier in the dusk.

Plans have been announced to renovate the quaint port and seafront pier of Huanchaco Village. A production and exhibition area for caballitos de totora (totora reed Ã¢Â€Â˜horses') will be constructed along the walkway in order to promote the use of these ancient reed surfcraft as a sport. There will also be an interpretation center explaining the areas pre-Columbian culture, including how the reed horses were made and used by fishermen thousands of years ago, for both work and play.

Other plans include bringing order to ambulatory vendors and improving cleanup services. Mayor Fernando Bazán confirmed that this is part of a new initiative to build Huanchaco's reputation as an adventure, relaxation, and cultural destination. Finally, touristic circuits will be organized, as well as shamanic experiences in the Pampas de Gramalote archeological complex, and Campana Hill will be fixed up. All of this, explained Bazán to a local news agency, "has been planned for the short and medium term, that is to say, in a period of one to five years." This is all great news for a unique town like Huanchaco, which has so much to boast of and yet is often overlooked.

That's not to say that Huanchaco doesn't have its fans already- many argue that riding the waves actually began here, thousands of years ago, so it should come as no surprise that Huanchaco was named the fifth World Surfing Reserve for its "consistent, clean surf" and seafaring legacy. (It takes its spot after Malibu, Ericeira, Manly-Freshwater and Santa Cruz.)

Many surfing enthusiasts travel north of Lima and up the Peruvian coast in search of some of the world's finest waves, and who can resist trying out these ancient crafts? "Huanchaco is surfing's equivalent to the great pyramids, an ancient cradle for surf culture," declared Fernando Aguerre, president of the International Surfing Association.

In fact, more of that ancient history seems to be coming to the surface, as another announcement today was of the unexpected finding of some large earthenware jars by construction workers. They appear to be from an ancient chicha corn beer production and storage site. Archeology specialists from the Regional Culture Board, DIRCETUR, were dispatched to carefully ascertain whether other treasures lie in the area. Thus far, they have unearthed six more pieces: ceramic jugs and part of a figurine.