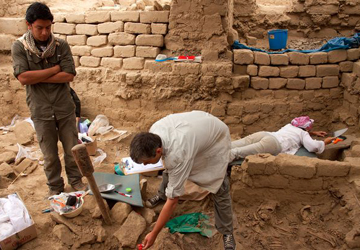 Dusting off a cane box with gold weaving tools 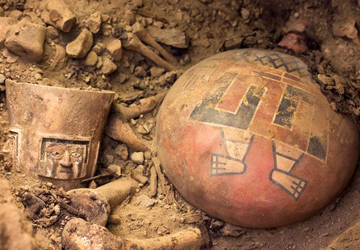 Carved alabaster cup and a flask with painted Wari Lord 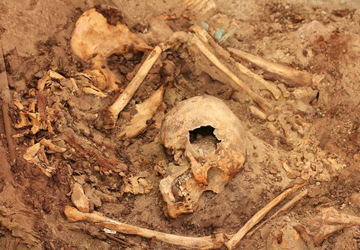 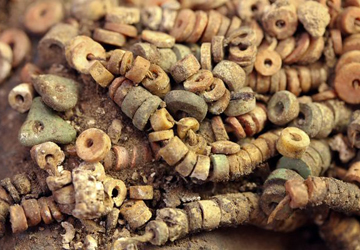 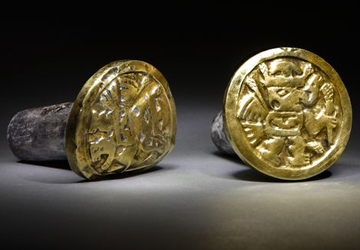 Gold earplugs from the Wari tomb, with winged figures

The Wari civilization built South America's earliest empire, which covered much of present-day Peru. Its capital, Huari, was one of the world's largest cities up to 1100AD. According to archeologist Krzysztof Makowski Hanula of the Pontifical Catholic University of Peru, "the Wari phenomenon can be compared to the empire of Alexander the Great. It's a brief historical phenomenon, but with great consequence." Yet, the rise of the Wari have remained little understood. That could all soon change with the recent discovery of an unlooted royal tomb discovered at El Castillo de Huarmey, four hours north of Lima by car.

Looters spent decades combing over the site's area, attracted by intricate Wari ceramics and other invaluable artifacts. However, a Polish-Peruvian team overseen by Giersz scrutinized aerial photos and geophysical images and came to believe that an underground mausoleum had been overlooked on a ridge covered in debris.

Their suspicions were confirmed when they uncovered a ceremonial room with stone throne, and underneath it, a grave marker leading them to a tomb. Fearful of looters, the team kept their discovery secret for months. What they've uncovered in these months has been stunning: more than a thousand artifacts, including sophisticated inlaid gold and silver ornaments and brightly painted ceramics. Among the 63 seated human remains were three Wari queens, surrounded by their priceless possession and by what appear to be human sacrifices.

Markowski likened the find to a "pantheon, like a mausoleum of all the Wari nobility in the region," and Giersz himself estimates that it will take eight to ten years to properly excavate and examine the tomb. The remains themselves provide priceless insight into how the queens passed their time at court, and even their life after death (as traces of insect pupae on the queens suggests that they were removed from the tomb, and possibly displayed as part of the royal ancestor worship).

"We are talking about the first unearthed royal imperial tomb," Giersz emphasized. The presence of such remains this far north means their control encroached upon the Moche kingdom, likely paying a role in the kingdom's downfall. (The theory is supported by a vessel depicting Wari invaders with axes facing coastal warriors.)