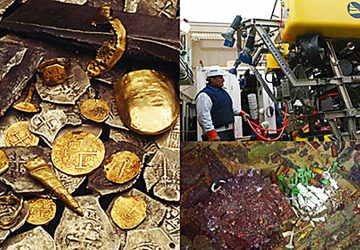 Salvaging the treasure of the Spanish Mercedes shipwreck. 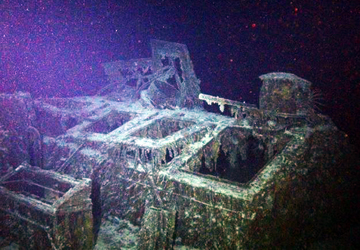 Underwater view of the Mercedes Shipwreck. 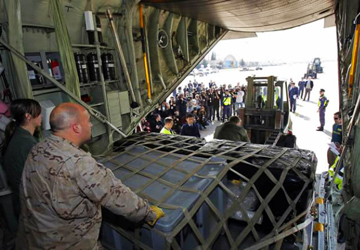 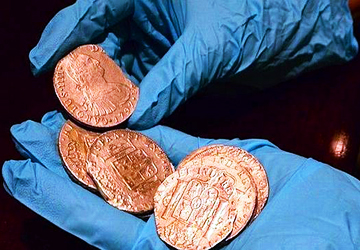 More than two centuries ago, the Mercedes set sail from the port of Lima, Peru, laden with 600 thousand pieces of gold and silver, mainly from Bolivia and Peru, only to be sunk in front of the Portuguese coast by the English fleet during a naval battle, with 200 people aboard. In 2007, American salvage company Odyssey Marine Exploration, recovered the loot and brought it to the States, but was forced by legal ruling to relinquish possession to Spain early this year.

Known for their rich mines, the minting houses of both Peru and Bolivia produced a large part of Spanish coinage at the time. Both have a strong argument to make that the precious metals belonged to their countries. Although Peru made a last-ditch appeal to block the transfer of the coins to Spain this February, arguing that much of the coins were mined and minted in Peru and asking for time to prepare a case, the appeal was denied by federal judge Clarence Thomas. The 595,000 coins arrived safely in Madrid on Feb. 25th, amid the protestations of Bolivia's Minister of Culture.

A group of South American descendants of the merchants who had dispatched funds and goods in the first place has been seeking financial compensation as well, as with an estimated worth of US$500 million, it is history's richest shipwreck haul, but the true value of the coins is archeological. As the source countries, the South American countries are asking to display a portion of the abundance as part of their own cultural heritage. Meanwhile, 30 museums in Spain are competing to display the loot. If you're interested in viewing some of the precious metals of Bolivia from the colonial or pre-Columbian period, check Inca World's selection of tours in Bolivia.