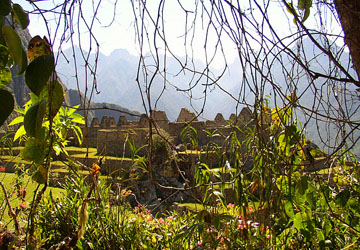 Machu Picchu seen through the vines in the Peruvian Andes. 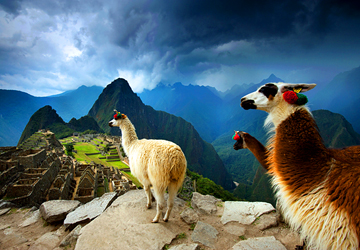 Llamas, the last permanent residents of Machu Picchu in Peru 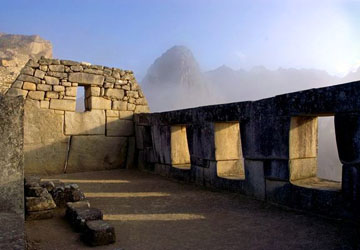 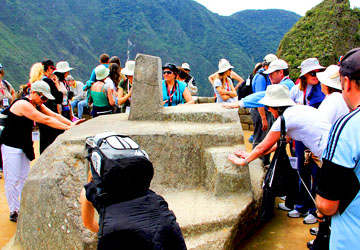 Machu Picchu's intihuatana, the 'hitching post of the sun'. 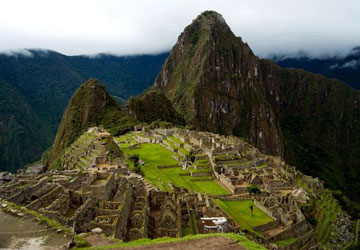 View of the archeological site within Machu Picchu Sanctuary

Despite Machu Picchu's popularity, it remains shrouded in mystery, a fact underscored last month when a burial chamber was discovered at the site. It differs from other area tombs in that it rests above these, in a cave high on the slope of Huayna Picchu overlooking Machu Picchu, and in that it was constructed with finely carved stones. Both features attest to the importance of the person interred therein. Unfortunately, the tomb was sacked by raiders at some point in its history, depriving archeologists of access to any remains, although specialists will still attempt to date and restore the tomb.

The currently prevailing theory among scholars is that Machu Picchu was a winter resort for the Inca emperor Pachacutec, although another popular school of thought is that it primarily functioned as a sacred center. Some scholars theorize that this, or another recently discovered tomb under the Temple of the Sun, may have been the grave of PachacÃƒÂºtec. This would accord with Luis Lumbreras's theory that Machu Picchu was a sanctuary dedicated to the dead, especially PachacÃƒÂºtec, based on a 1568 chronicle which relates that the lands of the Picchu ravine were dedicated to the cult to the dead. If you're interested in visiting the site and choosing for yourself which theories seem to unlock its secrets, make sure to browse Inca World Travel's Machu Picchu tours.

After studying the lost chapters of the Juan de Betanzos chronicles, Spanish historian María del Carmen Martín made headlines in March when she proclaimed that Machu Picchu's original name was Patallaqta (City of Terraces), the administrative center of the empire's agricultural network mentioned in various chronicles. In the chapters, PachacÃƒÂºtec requests to be buried in Patallaqta and Qoricancha. She slightly contradicted Lumbreras's theory that the tomb belonged to Pachacutec's mummy, clarifying that worshipers probably venerated a golden funerary bundle holding organs and nail and hair clippings taken throughout his life, with the embalmed mummy held in another bundle at Cusco's Qoricancha temple, common practice for Inca rulers at the time.