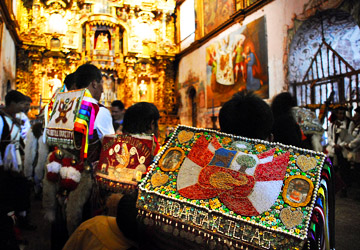 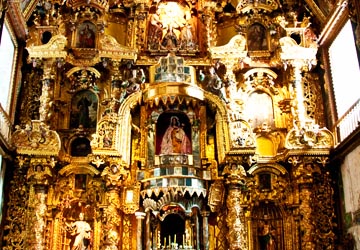 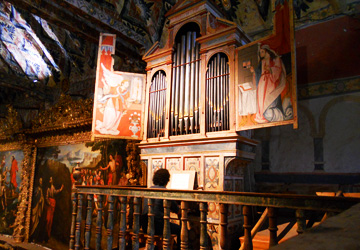 Playing the antique organ at San Pedro Church in Andahuaylil 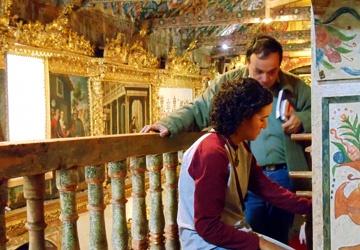 Playing the organ at San Pedro Church in Andahuaylillas Peru 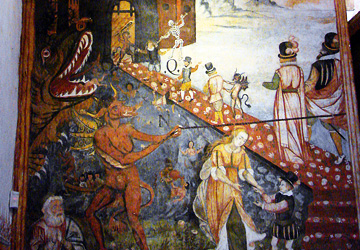 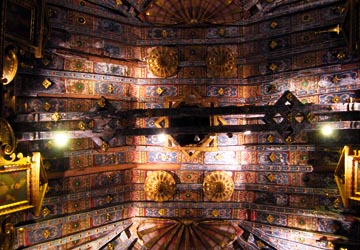 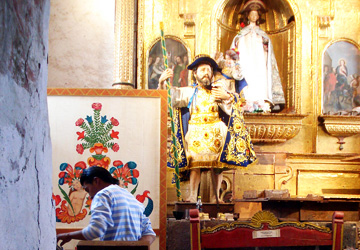 One of the San Pedro Church restorers at work 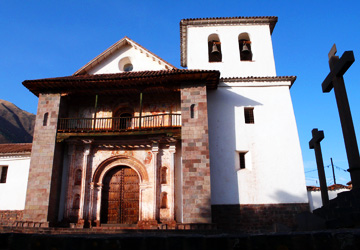 The exterior of San Pedro Church in Andahuaylillas, Peru 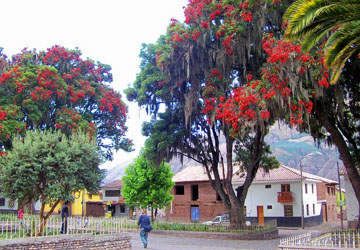 The central plaza of Andahuaylillas in the Southern Sacred V

After four years and US$1.5 million, the restoration of the Church of San Pedro in the remote Andean village of Andahuaylillas has been completed. With the backing of the World Monuments Fund and regional and national authorities, restorers tackled the ill effects of earthquakes, shoddy restorations and centuries of grime. Conservators used organic materials such as cactus extracts to stabilize the tempera murals and strip back layers of repainting over the original composition. The sculptures and altars, intricate carvings, and abundant gold leaf were also renovated, and a metric ton of bat droppings between the mud and straw ceiling and the roof was removed.

The church was originally constructed under the Jesuits upon the remains of Inca walls at a sacred pre-Columbian site near the end of the 16th century. Its simple exterior of thick adobe walls painted white with limestone and a hulking rectangular bell tower hide an unexpected sight which greets the visitor upon the opening of the doors: a shockingly ornate baroque interior explodes with intricate carvings, murals, and gold covering the ceiling, walls, and beams without leaving hardly any space unadorned. Inscriptions along the walls and arches are rendered in Latin, Spanish, Quechua, Aymara, and Puquina, providing interesting proof that this final language was probably also spoken in the region.

This exuberant adornment has earned little San Pedro a reputation as the "Sistine Chapel of the Americas". Its popularity has been rising thanks to the rather new touristic circuit known as the Andean Baroque Route. It's often visited during tours of the Southern Sacred Valley as well, and is easily accessible from Cusco by a short 25 mile bus ride.

Originally Andahuaylas de Apurímac, the town appears to have once been an Inca settlement of some importance, whose name means Copper-Colored Meadow. Its location in the fertile Vilcanota valley attracted important residents who built large estates during the colonial period, but the town then stagnated, with even its name being downgraded to the diminutive Andahuaylilla, and now boasts a population of only 5,000. The church is located in the central plaza with its aged pisonay trees and is considered not only the town's leading attraction but also one of South America's greatest colonial art treasures. The town celebrated the completion of the project this past Wednesday, October 31st.

According to Carol Damian, a Latin American art specialist and director of the Patricia and Phillip Frost Art Museum in Miami, the unknown artists were highly skilled and worked in a guild. The intricate patterns and Arabic imagery of the Mudejar-style ceiling "appealed to the indigenous people because it is geometric and the Incan artists worked with geometric design, as seen in their textiles and pottery. But these indigenous artists added far more floral patterns than Arab artists."

Based on the variety of painting and sculptural styles, it appears that the church was decorated over a large period of time. One of the known contributers is Luis de Reaño, a Lima-born Cusco transplant who undertook some of the symbolic murals under the guidance of Jesuit PÃƒÂ©rez de Bocanegra, overseeing a team of indigenous painters. His main project was the murals depicting the routes to heaven and hell, crucifixion, baptism of Christ, and the Archangel San Miguel. The painting of the Virgen of Rosario which is housed in the chapel of the Holy Sacrament has been attributed to Diego Quispe Tito, perhaps the most famous artist of the renowned Cusco School of painting, whose Last Supper complete with guinea-pig main course resides in Cusco's Basilica Cathedral.