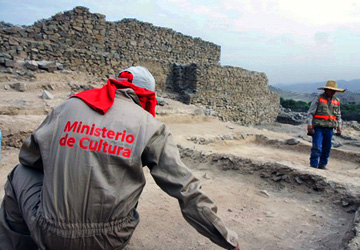 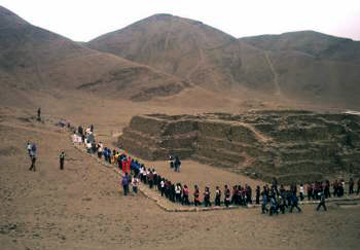 Crowd around the newly unearthed temple at El Paraiso. 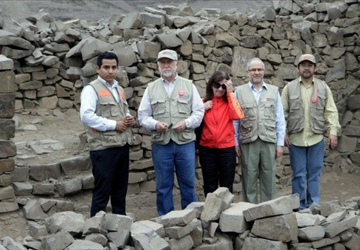 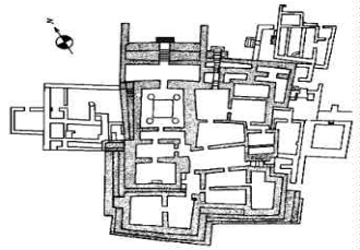 Blueprint of the ancient pyramid at El Paraiso. 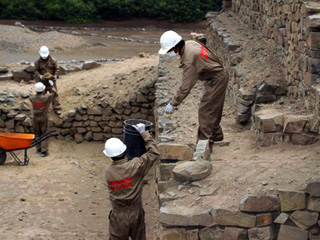 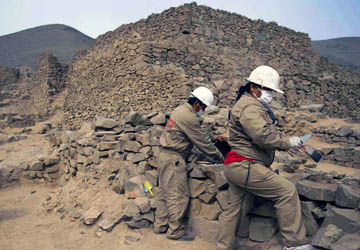 Cleaning up the ancient site along Peru's desert coast

Last week archeologists in Peru announced the discovery of a temple just northeast of Lima, at El Paraiso Archeological Complex in the Chillon valley. The complex is said to house ten architectural units, including temples, plazas, and residences, which once housed an estimated 3,000 people, but up to now only the central pyramid has been uncovered.

Dating back 5,000 years, the newly discovered temple will provide invaluable insight into one of the Americas' oldest populated sites. Researchers from the Peruvian Ministry of Culture have suggested that it could be a temple, and have shared that it contains signs suggesting the use of ritual fire. Its narrow entrance, measuring only 19inches, was discovered by the archeological team under Marco Guillen while they were removing sand and stones from El Paraíso's central pyramid. It led the archeologists into a 26 by 20 foot chamber where it appears that flowers, fruit, shellfish, and grains were burnt as offerings. The walls were finely coated in yellow soil and still bear traces of red paint. Guillen explained that "the smoke allowed the priests to connect with the gods," and indicated that upon passing the chamber, the temple has four levels, each successively older than the last. The entrance's small size meant that only one person could enter the central room at the time. "There is a lot to discover in order to untangle the mysteries held at El Pariso," Guillen added, "we need to know if below these structures there are even older ones. We just began and already found the Temple of Fire," he said.

The rectangular building is built of stone but research indicates that it was once plastered with mud and decorated with red paint. While it is said to be comparable in age to the nearby Sacred City of Caral, it displays characteristics which make it, in the words of the Ministry of Culture's Deputy Minister Rafael Male Gabai, "the first of this type of structure that is located in the central coast, which confirms that the current Lima region was one of the centers of civilization in the Andean region, demonstrating its religious, economic and political (value) since time immemorial." One thing is clear- the site showcases a Ã¢Â€Â˜construction blueprint' with echoes throughout the Andean peaks and the following centuries, proving that the Andean world was more closely connected than previously thought.

Gabai hopes that the findings inspire greater preservation (as the site has problems with squatters) and further research. His wish may be granted, as the Humala administration has allocated US$1.8 million for research at the site to be conducted over the next five years.