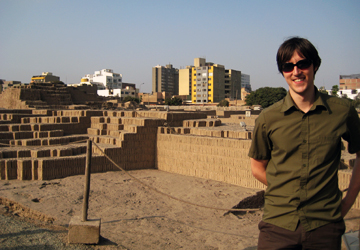 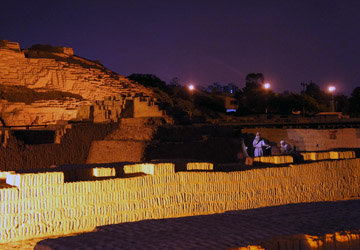 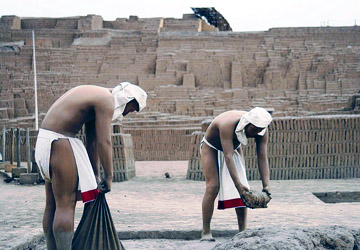 One of the exhibits showing the site's pre-Columbian life 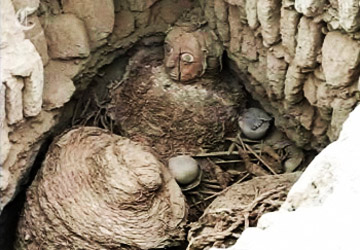 Buried remains at Huaca Pucllana were wrapped in rope. 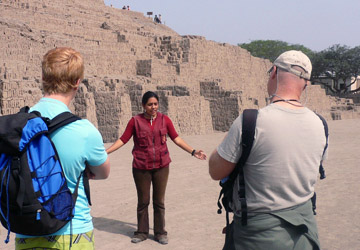 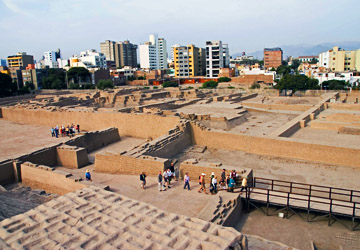 Miraflores, Lima, in the background 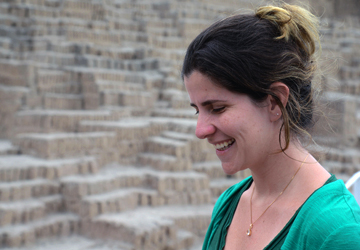 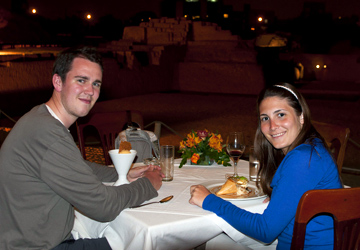 Two thousand-year old mummies were uncovered this week at the ancient site of Huaca Pucllana in Lima, Peru. One of them is a baby believed to have been buried alive after the death of the adult, probably as an offering to the gods. "This is one of the most important finds in more than three decades of excavation, because the mummies are intact," explained site researcher Gladys Paz. The mummies are squatting in a typical burial position for pre-Columbian cultures in the area, and are completely covered in rope. Other offerings accompanied the mummies, including guinea pig remains and jars with feline motifs.

The religious complex is located amidst the modern urban buildings of Peru's coastal district of Miraflores, whose green cliffs overlook the Pacific Ocean. Almost entirely constructed of adobe bricks, Huaca Pucllana was built by the Lima culture (200-700DC) but also subsequently occupied by the Wari (800-900DC) and the Ychsma (1000-1532). In addition to the Great Pyramid, the complex includes a series of patios, plazas and enclosures. It has been under continual excavation since 1981, by a team lead by Dr. Isabel Flores Espinoza, although visitors are admitted despite the ongoing work. Frequent findings include ceramics with marine motifs such as sharks, waves, sea lions, squids.

The majority of human remains unearthed thus far have been human sacrifices, although evidence suggests that during the Wari occupation the highest parts of the Great Pyramid were destroyed and converted into an elite cemetery. The remains are mainly of young women, although males and children have also been found in much lower quantity. Recent discoveries include the remains of a woman with four children in 2010 and those of a teenage girl in 2008.

A touristic circuit allows for visitors to explore the site, with guides available at regular intervals throughout the day to lead tours in Spanish, English, Japanese, and French. Because more than half the site still hasn't been excavated, one must explore the site with its official guides. A visitor's center exhibits some of the primary findings of the archeological team, while a small park shows the plants cultivated and the animals raised during the time of the Lima.