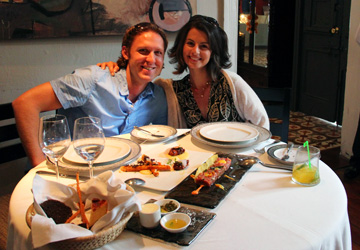 Eating at the Astrid & Gaston Restaurant in Lima Peru 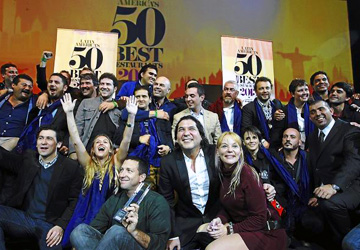 When UK-based William Reed Business Media published its list of the top restaurants in Latin America, the team at Astrid & Gaston was elated to take the coveted first spot. This landmark restaurant in Miraflores, Lima is owned by Peru's most prominent celebrity chef, Gaston Acurio and his wife Astrid Gutsche, although the kitchen is overseen on a daily basis by Chef Diego Muñoz. They had already ranked number fourteen earlier this year in London's The World's 50 Best Restaurants (sponsored by S. Pellegrino & Acqua Panna and also organized by William Reed), but to are topping one of these prestigious lists for the first time. 250 influential leaders in the restaurant industry participated in voting for Latin America's best restaurants in order to create the list. For Acurio, the accolades didn't stop there- during the award ceremony in Lima this month, Acurio also received The Diners Club Lifetime Achievement Award

The other Peruvian restaurants which won spots in the rankings demonstrate the diverse character of Lima's culinary scene. At number four is Central Restaurant, which was founded by the ex-head chef of Astrid and Gaston and relies on many international influences, while Malabar took number seven by serving up Amazonian fusion dishes relying on an array of exotic ingredients. Other Peruvian restaurants which made the list outside of the top ten include the Japanese-Peruvian Maido (No. 11), Rafael (No. 13), Fiesta (No. 14) and Acurio's popular cevichería La Mar (No. 15).