Graves Discovered at Salapunku May be Part of Inca Cemetery 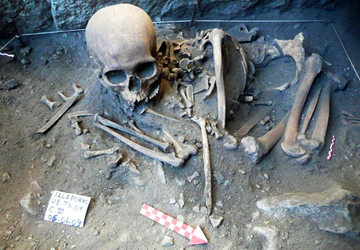 Another skeleton also discovered at Salapunku, in 2009 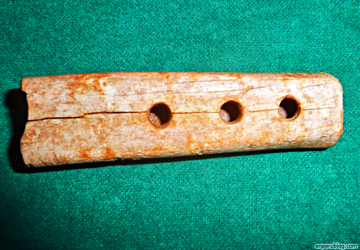 Inca flute discovered at Salapunku in 2010 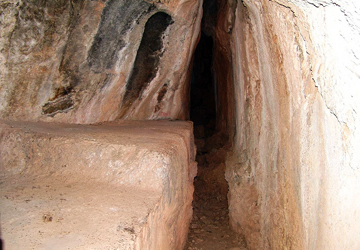 Part of the stonework at Salapunku, by Machu Picchu Sanctuar 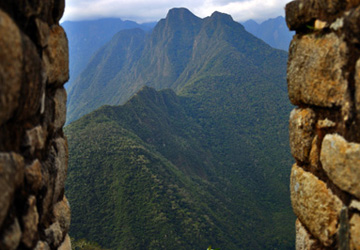 View from a windo at Winay Wayna along the Inca Trail

Hikers along the Classic Inca Trail to Machu Picchu in Peru 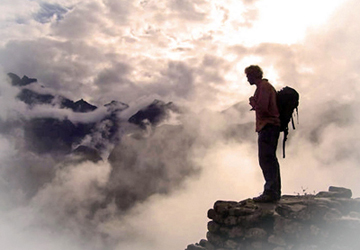 Archeologist Elba Torre Espino from Cusco's Regional Cultural Committee (DIRECTUR) announced today vía Peruvian news organ RPP that various artifacts were discovered at Salapunku, a section of the Inca Trail located between Kilometers 83 and 83, in the "buffer zone" for Machu Picchu Sanctuary. The finding is of two graves with human remains as well as ceramics and textiles.

One of the individuals was found with a soft textile which according to cursory preliminary observations dates the bodies to the Inca Culture. Throughout the zone there appears to be a great quantity of bones, as well as more Incan ceramics and textiles,  although the exact number will not be known for a some days due to the painstaking excavation process. All the artifacts unearthed will be transported to a laboratory for further examination. There is the possibility that the area may be part of an Incan cemetery.

This recent finding comes on the heels of the finding of a pre-Inca ceremonial offering  in the very heart of Machu Picchu last month, a possible royal tomb uncovered within the sanctuary, and other findings in the surrounding area. In the Salapunku area, a variety of skeletons and artifacts have been found in recent years, and more are expected as the site has been under an ongoing archeological excavation since the middle of this year. Other segments of the Inca Trail and Machu Picchu Sanctuary under current excavation include the Kanabamba, Wayna Q'ente, Torontoy, Qantupata, and Intiwatana sectors.

Salapunku is the first of a series of Incan and pre-Incan archeological sites found along the Inca Trail to Machu Picchu, Peru's most popular trek thanks to its natural beauty and rich history. It was once part of the vast road system known as the Qapac Ñan, or royal road. The trail takes hikers from the traditional communities of the Sacred Valley up through the cloud forest and into the high-altitude jungle, passing along the way waterfalls and Incan ruins long since settled in to the surrounding vegetation. Those who don't have four days to get to Machu Picchu but still wish to arrive on foot, through the Sun Gate, can opt for a shortened version known as the 2-day Inca Trail.