From La Paz to Uyuni: Along the Quinoa Route in Bolivia 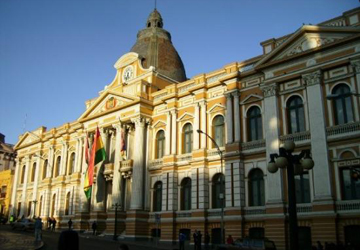 It all begins at Government Palace in La Paz, Bolivia 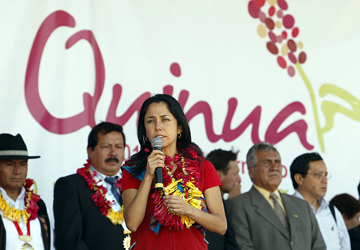 The First Lady of Peru is a Quinua spokeperson as well

The 50-vehicle caravan departed from Government Palace in La Paz in March, en route to Patacamaya and Sica Sica in La Paz, Challapata and Salinas de Garci Mendoza in Oruro, and Coroma in Potosí. Along the way, participants sampled a variety of quinua-based products including such as ice creams, drinks, cakes, and pizza. The project was known as the Quinoa Route, aimed at raising the profile of this rising agricultural superstar which, after intense campaigning by Bolivian president Evo Morales, was honored by the UN when it declared 2013 the International Year of Quinua. The Food & Agriculture association (FAO) even designated President Morales and the First Lady of Peru, Nadine Heredia, as international ambassadors for the grain.

The trip ended in Uyuni Salar with a closing ceremony overseen by Minister of Health Juan Carlos Calvimontes and the Governor of Potosí Felix Gonzales and festival organized by locals. Alongside traditional music and dance, artisans, agriculturalists, and housewives all spoke in their turn explaining the benefits to quinoa consumption and production. In his speech, Calvimontes declared highlighted the grain's nutritive qualities, while Vice-minister of Rural Development Victor Hugo Vásquez emphasized the environmental benefits of quinoa cultivation and reiterated the government's dedication to contribute by assisting with water, seeds, fuel, and credit aid.

Bolivia is already the world's major quinua producer, and of the 48 thousand tons grown last year, 36 were sold internationally. The type known as quinua real is considered superior and grown only in Potosí on the lands surrounding the salt flats, at around 3,700 meters above sea level.

According to the vicepresident of the National Quinua Association, Jaime Belen, Bolivia will invest 13 million bolivianos (almost two million dollars) in constructing a quinua processing plant in Uyuni in hopes of bringing more value-added products to market.

The national government has also been studying the possibility of encouraging small processing industries throughout high-production regions in order to stabilize prices (helping individual growers avoid having to sell very cheaply).