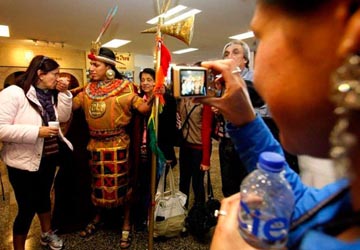 The Inca welcoming new arrivals to the Cusco airport 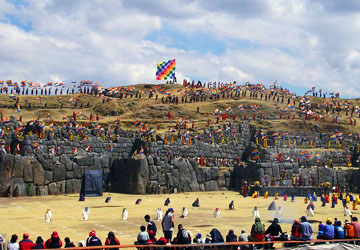 Sacsayhuaman Fortress on the outskirts of Cusco 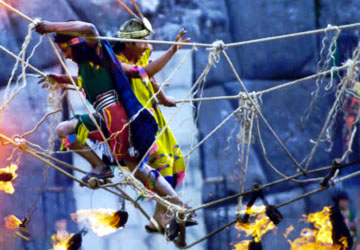 Competing youths at the Warachicuy Festival in Cusco 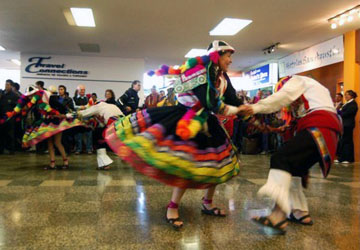 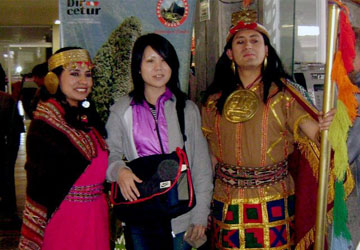 Receiving gifts and a warm welcome in Cusco's airport

Cusco always celebrates World Tourism Day with a month's worth of activities. Although must of the schedule details are still vague, some information has been released regarding the bigger events. It all starts this Friday, September 13th in the Plaza de Armas of Cusco with "Todo el PerÃƒÂº in Cusco" with Fabiola de la Cuba and local musical artists. The outdoor concert will begin at 6pm.

On September 15th the Warachicuy Festival will take place at Sacsayhuaman Fortress, with some 1500 participating. In the days of the Inca Empire, the Warachikuy festival was rite of passage for youths of the nobility which determined how a youth might be ranked for military or civil service, his place in the hierarchy, and his readiness for war, leadership, or marriage. Today it represents the end of schooling and entrance into society as adults. 4 Incan "armies" (each representing a different region of the emipire) depart from different barracks around Cusco, from the Plaza San Francisco, the Plaza de Armas, Qorikancha, and Plaza Rimaqpampa. The Inca initiates proceedings with a series of rituals, afterwhich tests of skill (speed, strength, resistance, etc) are interspersed with war dances. The final events are the Taqanakuy and Inka Paq'areq mock battles. After the declaration of peace, the Inca youth receive their champis and waras from the Inca with much jubilation, now being considered graduated.

From September 16th - 22nd, a series of day trips and activities highlighting the region's different attractions will take place. This is known as the La Gran Excursión, the Great Excursion. Despite these free tours being the most exciting event of the month, details haven't yet been released. A press conference is being held today, however, so hopefully we'll be updating soon with more information.

On Saturday, September 21st, there will be a Rafting Festival in Aguas Planas at Laguna Pomacanchi. The event will begin at 9:30am and will include kayaking, rafting, fishing, and caballito de totora competitions. Make sure to stop by to see the caballitos, reed watercrafts which Peruvian fisherman in Huanchaco have used for the last 3,000 years. They are called totora reed horses because they were traditionally straddled.

Tourists who arrive at the Alejandro Velasco Astete airport in Cusco on the morning of Monday, Sept 27th may be surprised to be greeted by welcoming committees including local officials and traditionally dressed folkloric dancers. There's even an Incan ruler waiting to welcome them to the former imperial city. This generally takes place from about 6am to 2pm each year, during which new arrivals receive gifts from the city. After leaving the airport, they make their way to the Plaza de Armas.