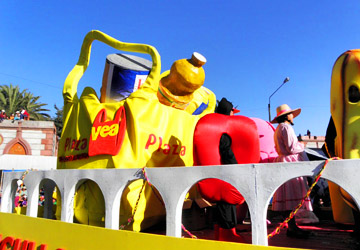 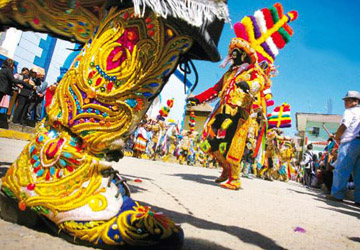 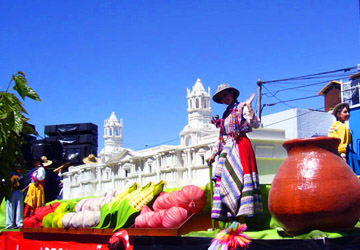 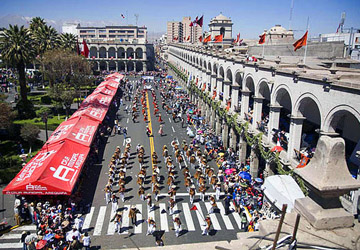 The Plaza de Armas of Arequipa during the parade 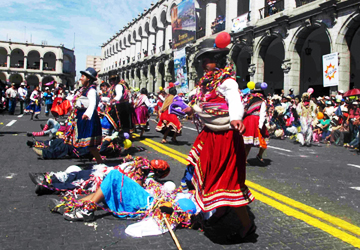 The Arequipa anniversary parade in the Plaza de Armas 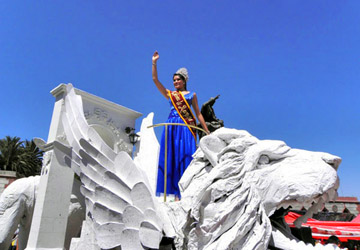 The Queen on her float during the parade. 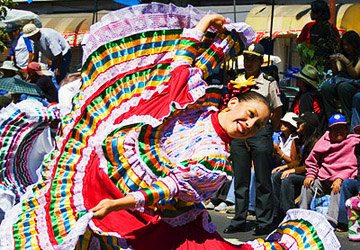 This month, Arequipa celebrates its 473rd Anniversary. Celebrations have been ongoing since the final week of July, including a variety of outdoor concerts, food festivals highlighting regional specialties from Chicha to Adobo Caymeño, and sillar carving contests. This in spite of the region suffering a difficult month due to freezing temperatures plaguing vulnerable high Andean communities which were already suffering through a recently ended nurses' strike.

Yesterday, locals even took part in a 10K marathon and the local military hosted an aeronautics festival. The main events, however, will be taking place this week. Thousands are expected to flock to the White City to join the Arequipeños as they enjoy the music, dance, and food for which the city is known.

This Wednesday night, from August 14th through to the following day, the Serenade to Arequipa will take place at the Mario Vargas Llosa Metropolitan Palace of Fine Arts on Avenida Parra, at 7:30pm. On Thursday, August 15th, the famous Friendship Parade, known as the Corso de la Amistad, will begin to wind through the central streets of Arequipa at 10am. This year's slogan is "Arequipa, World Cultural Heritage." So many dancer, musicians, and parade floats will be participating that the event is expected to take around 8 hours. Overall, it will tour over 4 kilometers.

The parade is managed by the Provincial Municipality's Festival Committee, whose president Heber Cueva Escobedo ordered an obligatory training for this year's dance groups at the end of July, for the first time in the parade's history. They also mandated that 80% of the dances must be from the Arequipa region, restricting the number of dances from Puno that would be allowed. The event is so highly anticipated that several days ago, Avenida Independencia was sectioned off with paint by people attempting to mark spots as Ã¢Â€Â˜reserved', forcing the local authorities to remind locals that the streets and sidewalks are public property.

If you are unwilling to jostle with the crowds along the most prized spectator real estate, the trajectory will be the same as last year: it begins on Avenida Lima and then continues along Avenida Mariscal Castilla, Avenida Independencia, Calle Víctor Lira, and Avenida Dolores, to finish along Avenida AndrÃƒÂ©s Avelino Cáceres. Apart from the parade itself, expect costumed characters, roving food and drink vendors, and an air of general festivity and city pride!