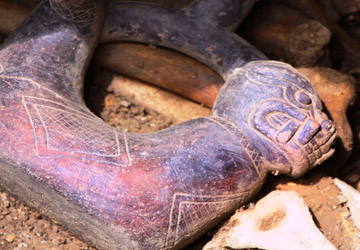 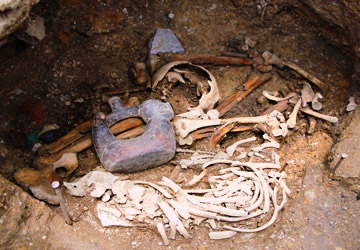 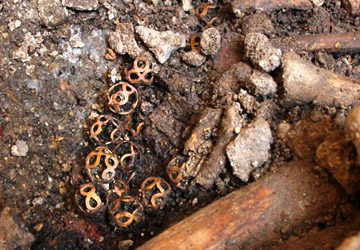 Last week, a Japanese-Peruvian archaeological team discovered a tomb in Chota, Cajamarca in northern Peru which dates back 2,700 years. The tomb is completely intact, which mean that no one has laid eyes or hand on it since the bodies and the artifacts accompanying them were first laid into the ground. Although tombs and ruins are discovered in Peru with frequency, one which has never been sacked by treasure-hunters or grave-robbers is a special find.

The tomb has been named The Tomb of the Serpent-Jaguar Priests. It dates back to the pre-Incan Pacopampa culture, which flourished from 1200 to 500BC along the Andean cordillera and was a contemporary of the well-known Chavín culture. The bodies of two high-ranking priests were found, along with fine ceramics and an ornate golden necklace. The priests were buried a meter deep in the tomb of the Lady of Pacopampa, which was discovered in 2009. The first priest was buried with the necklace, a piece with thirteen golden ovoid beads with 8-shaped cutouts and multicolored stones, while the second was buried with a black ceramic bottle that has the body of a serpent and the head of a jaguar. Like the Lady of Pacopampa, they were buried in the fetal position, and the two bodies were facing opposite directions, one to the south and one to the north.

Co-director Daniel Morales explained to news outlets covering the find that "as the figures are in the same place where they were rituals and feasts, we assume that they may have been responsible for conducting ceremonies during the apogee of that culture, between 800 and 500 BC." They were buried to the side of a large cuadrangular sunken plaza bordered by carved stone walls and two access stairways. The plaza appeared to be part of a ceremonial center related to agriculture, which also boasts three platforms facing northeast, towards the Pleiades constellation. The bodies of the priests were located at the level of the third platform, where archaeologists have been working for a decade. It will take many more years to fully excavate the lower two platforms.

The team is part of a binational project called the Projecto Proyecto Arqueológico Pacopampa PerÃƒÂº-Japón; it is led by Japanese researcher Yuji Seki and is under the support of Peru's National University of San Marcos.