The wonderful city of Cusco nestled in the Peruvian Andes (3350 m) in southern Peru, this magical city retains its numerous archaeological remains left by their Inca ancestors, palaces, temples, aqueducts, agricultural terraces, monuments, still retain their original design of those framers of the greatest empire known as the Tahuantinsuyo. The town still retains those traditions rooted as Inti Raymi is held every June 24. The tour starts with a visit to the Sacred Valley where you can see all these stunning buildings such as Pisac, Ollantaytambo, Chinchero, and then know the wonder of the world Machu Picchu nestled between mountains and canyons and having the opportunity to be present in the greatest celebration of Cusco the Inti Raymi. 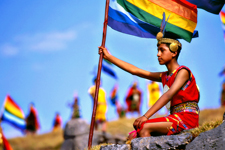 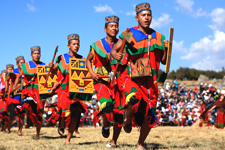 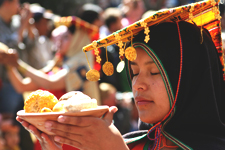 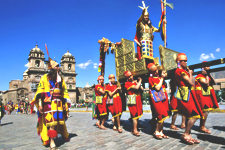 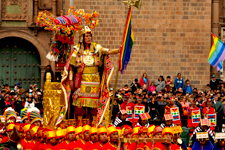 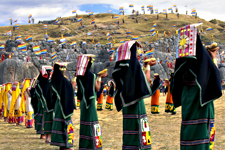 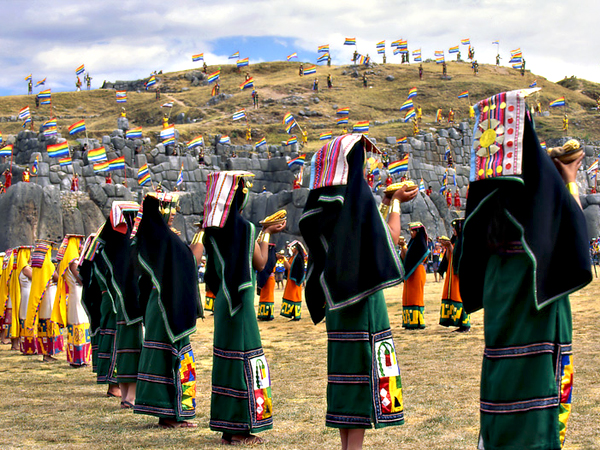 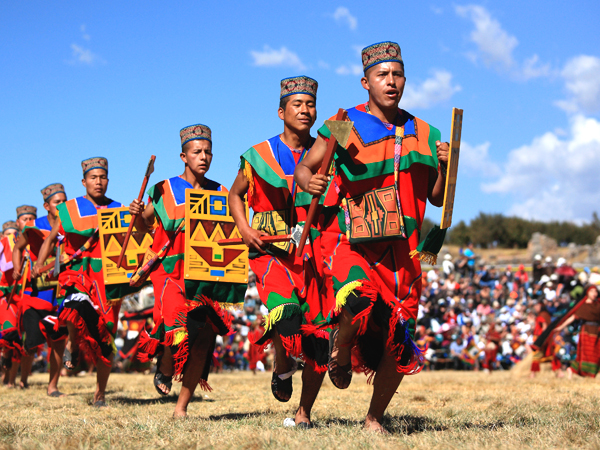 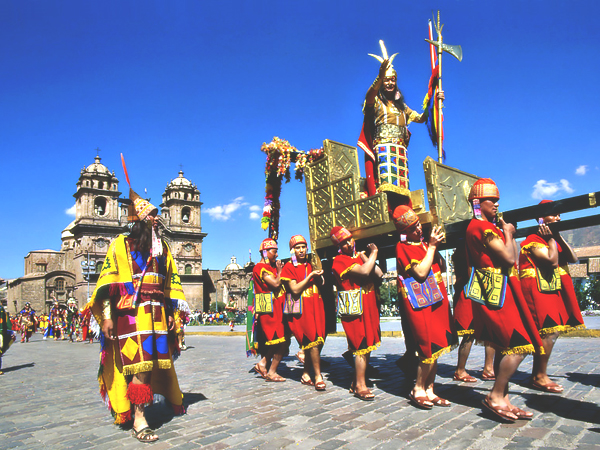 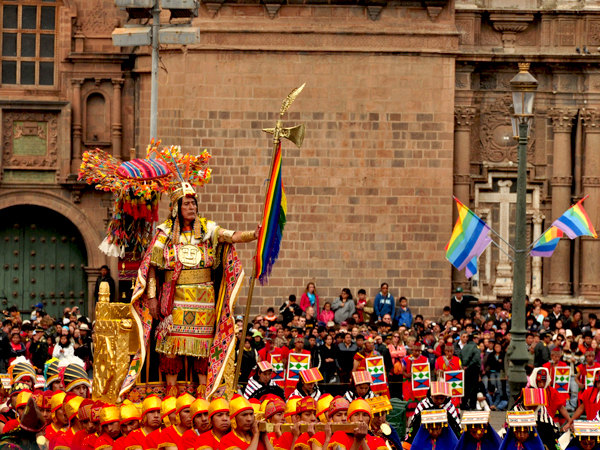 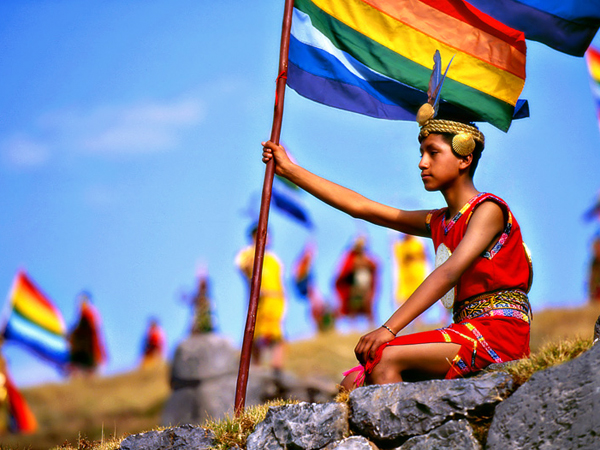 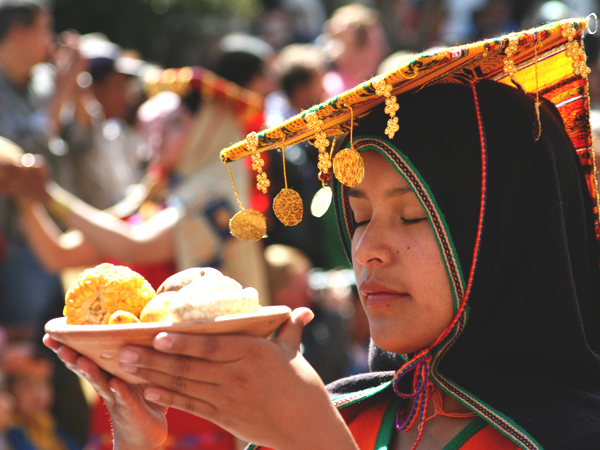 Pick up at the Airport

Arrival at the International Airport Alejandro Velazco Astete. Reception and transfer at hotel, where you will receive a Coca Tea which is good for altitude sickness (coca has relaxing properties good for the muscles). We will have the rest of day off. We suggest you take a walk through the main streets of Cusco.

You'll be picked up at around 8:00-8:30 in the morning and we'll set off for the Sacred Valley of the Incas by bus. After an hour we'll reach our first stop, the village of Pisaq. We'll have time to tour the popular local market before continuing on for a guided visit to the hilltop archeological site at whose feet the town lies.

The Inca ruins of Pisaq are a large complex which includes narrow agricultural terraces known as the Pisaqa, the Q'allaqasa fortress, and the religious center of every Inca town, the sun temple, or Intihuatana, which may also have served as an astronomical observatory. It was here that the solar clock was located, referred to as the "hitching post" of the sun because it appeared to hold the sun in position during the equinoxes, as well as the ritual baths and the temples.

After a couple of hours uncovering the mysteries of Pisaq, we'll head to Urubamba at midday for a buffet lunch. Along the way we'll pass through small towns such as Coya, Lamay, and Calca and be able to appreciate the pastoral grandeur of the Sacred Valley landscape.

We'll then continue our journey to Ollantaytambo to explore the town itself, one of the best surviving illustrations of Incan urban planning, with many buildings resting on original Inca bases, as well as the ruins at whose foot it lays, the imposing Fortress of Ollantaytambo. Built to defend the strategic entrance to the Lower Urubamba Valley, this was the only Inca stronghold to have successfully resisted Spanish attack, and today is one of the largest and best-preserved Inca fortresses. It took thousands of men to transport the stones from high on the other side of the Urubamba River and build the complex, which was never completed and then finish visiting Chinchero.

Chinchero as known as "birthplace of the rainbow".

We will pick you up from your hotel and bring you to the train station, where you will go by train approximately 4 hour from Cusco to town of Aguas Calientes town (Hot waters).  You will appreciate the beauty nature of the region during the train ride, them when you will  arrive to Machupicchu we pick you up from the train station and bring to the hostel, so this day you have free day maybe you can go to the hot springs, or just walk around the town.

We will have a breakfast and we will take the bus form Aguas Calientes to Machu Picchu Sanctuary. You will have a guide tour for 2hrs approximately, visiting the Sacred Sun Dial (Intihuatana), the temple of the Three Windows, Guard tower, then you have a free time to explore on your own and after that we will return to Aguas Calientes (Hot waters), where we will have lunch and return to Cusco in the train.

The lunch in Aguas Calientes is optional (Sanctuary lodge).

La Fiesta Del Sol or Inti Raymi marks the end of the harvest period and begins the vernal equinox in the Andes. The celebration was start a new year and finished all the previous crop year and also began a new agricultural cycle from July. The celebration takes place in three different scenarios:

Koricancha: is the starting point of this celebration. "THE INKA SAPAN TAYTA APU," the son of the Sun, appears accompanied by his court which kicks off the celebration.

Square: the Inca ruler is born in a royal litter from the Koricancha to Huacaypata Square (Guerrero), through the Inti Kijllu, where he will meet with city officials and agree to work together for the prosperity of the people.

Sacsayhuaman: at approximately half past one p.m. we will be in the portentous Sacsayhuaman, where we drive in our car and where we have reserved our seats.

the Ñustas and the warriors take their place, each group representing the 4 dances with his plays Andean music. The Inca took the beer and offered in sacrifice the life of a llama, evoking aloud to his father the Sun. With the barn and burning of fat called the priests predict the future that will come next year. The predictions of the high priests interpreted by the Willac Umo, the priest who carried the news to the Inca.
Finally the evening was laid off to the Inca orders all to withdraw from the site to make room for the dancers of the communities of Cusco, the audience erupts in joy eagerly awaiting the next year.

In the afternoon transfer to the hotel.

According the time, transportation will be provided to go the airport.

If you goin to stay in Cusco for the first time is necessary to know about Altitude Sickness.